Henri Matisse's Art was made to soothe the suffering.

Do not let thoughts to intervene in the way of creation, do not think, but simply spread on the canvas as you feel, as if your hand would hold the brush like a robot controlled from another dimension. As if the mind is turned off, you are carried away through the world of colors, and the end is seen as waking up to reality.

When you awake, you then look at your canvas and see the creation of a man who was not present, and all that is left are his feeling’s on canvas. This is a characterization of what Henri Matisse accomplished; the artist himself describes his manner of painting as, “you have to offer yourself up in all purity and innocence, almost cleared of memory, like a communicant going to communion.”

If Frida Kahlo restored feelings of anger, grief and despair on canvas, Matisse tried to create a world setting in which sufferers can be relieved from their pain, and how else than making paintings from his soul: “I am after an art of equilibrium and purity, an art that neither unsettles nor confuses. I would like people who are weary, stressed and broken to find peace and tranquility as they look at my pictures,” said Matisse in his memoirs.

His paintings are not complicated. They do not require any special knowledge of art in order to be understood. This was also the artist’s desire. He wanted to empathize with sufferers by showing them a bohemian world, free from the daily hardships, where they can find refuge. And this he certainly succeeds by minimizing the human figure.

It is all summarized in the contour of the character, which is surrounded by bright colors, pleasing to the eye. These colors give you a sense of freedom. Such an example is the famous painting “La Dance,” made in 1909, that stands now on the Museum of Modern Art’s wall, in New York. The choice of colors has its forerunner in Persian ceramics and miniatures which, until the 13th century, often used pure reds, greens and blues in creating ornamental surfaces. In fact, the oriental style will be present in his paintings throughout his life. However, the explosion of color is what highlightened Matisse as an artist. His trademark is the combination of bright colors next to the strong black outline of the characters. 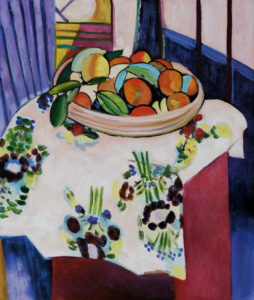 Matisse clearly explains why he chose to represent such characters: “My models are human figures, not simply extras in some interior. They are the major subject of my work. Their forms may not be perfect, but they are always expressive.” Matisse explains how the simple contour of the bodies awakened in him an emotional interest. Therefore, they do not need to be very visible. The people are often seen in lines or particular values distributed on the entire canvas.

This presentation becomes a sort of orchestral or architectonic extension of the theme in the artist’s eyes. The minimalism is taken to extremes to preserve feelings, it is Matisse’s explanation: “What really concerns me above all else, is expression.” He pursuits for the expression not to be a passion we see on a face, but to be located in the entire painting. The position of the characters, the spaces that he left empty, the proportions, they all made a whole, and if you extract one of them, the painting is left without value.

The still-life is a constant part of Matisse’s art. In addition to human figures, still-life completes the big picture that the artist makes through his paintings in search of the peaceful world that alleviates the suffering. The artist explains that nature is part of human, and Man is part of Nature, and both are linked to the entire Universe.

“Still Life with Oranges” is one of Matisse’s famous paintings. Picasso himself bought it in 1944 out of a private collection. Oranges are often to be found in Matisse’s work. Therefore, Guillaume Apollinaire remarked: “If Matisse’s work can be compared to anything, then to an orange. Like the orange, Henri Matisse’s paintings are the fruit of dazzling light.” However, the artist didn’t copy the objects, because he considered that this type of painting is not art. “What counts is to express the emotion they call forth in you, the feeling they awaken, the relation they established between the objects…”

This is the proof that Matisse was looking for feelings even in still art, in order to give peace to the viewer.